The Greatest Relay Team in History

Recently, Behind the Blocks' Priyant interviewed Dutch relay gold medalist Ranomi Kromowidjojo. In introducing the article, he mentioned that if the Dutch women win the 4x100 Free Relay in Rome, they would be the greatest relay in history, with the same four girls winning the relay at World Short Course and Long Course, European Short Course and Long Course, and Olympics. (Not exactly true as there was a substitution at World Short Course, and there's only 4x50 at European Short Course.) I think it's a great quartet, but the greatest ever?

To be considered the greatest relay in history in my opinion, a team must dominate the event over a long period of time. The one that comes to mind for me is the American 4x200 Free Relay. At the 2004 Olympics, Michael Phelps, Ryan Lochte, Peter Vanderkaay, and Klete Keller took gold. At the next two World Championships and well as Pan Pacs, the same four men continued winning, each time getting faster and extending their winning margin. In Beijing, Ricky Berens was substituted for Klete Keller, but if Keller had swum, the Americans would still have won by five seconds and broken seven minutes. The only slightly comparable relay would be the medley relay of Peirsol, Hansen, Crocker/Phelps, and Lezak, which won every major meet from 2002-2008 other than 2007 Melbourne when they were DQ'ed. But is a relay is judged to be "greatest" by its complete dominance over a long period of time, the American men's 4x200 wins out.
Posted by David Rieder at 11:04 AM No comments:

"I'm feeling in good shape but this suit is of a different world. This is a really weird piece of equipment, one that I've never worn before. You don't die in the last metres, and you feel no pain. Under normal circumstances, this suit should be forbidden, and I expect that by 2010 it will be. I felt like a speedboat in water, and never in my life would I have believed that a human could glide like that."

She sums it up rather well. I can add the Adidas Hydrofoil (her suit) to my list of "Bullsuits." Already includes the Jaked 01, Arena X-Glide, and to some extent the Blueseventy. NO ONE is happy! (Ok, maybe guys like Fred Bousquet or Rafael Munoz who have their precious Jakeds back.) When will FINA get the message? ENOUGH IS ENOUGH!

Because of the Bullsuits, I will make two prediction lists for the World Champs. One based on the swimmers, one based on the suits. The only reason for the first one is to show what would have happened and to show the effects that Bullsuits make.
Posted by David Rieder at 11:05 AM 1 comment:

Meichtry Says It All!

Many of us remember Dominik Meichtry from the Olympics. He was the guy who beat Michael Phelps in their 200 Free prelim heat. A Cal-Berkely grad, he still trains with Dave Durden in preparation for this summer's World Championships in Rome, where he is a threat for a medal in the 200 Free.

His reaction to the free-for-all of new suit technology is simple, but the most accurate description of the crisis the swimming world is in. Check it out.

This is how I show my disgust at the new ruling. 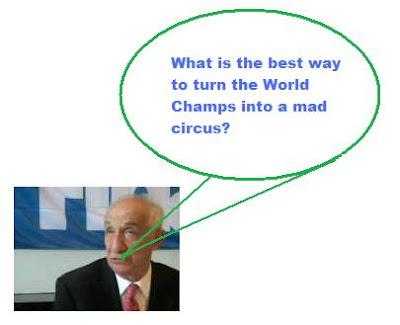 Craig Lord has criticized FINA President Mustapha Larfaoui many times for allowing the swimming world to fall into this suit crisis. I am beginning to agree with him,
Posted by David Rieder at 3:23 PM No comments:

At the Quebec Cup in Montreal, Matt Targett broke Andrew Lauterstein's 50 Fly Australian Record. His time of 23.17 eclipsed the mark of 23.30 set in the semi-finals of the recent Australian National Championships. He out-distanced Chris Brady of the University of Michigan by more than a second. Targett himself had finished one one-hundreth adrift when Lauterstein set the record and would go on to finish second in the finals. This swim makes Targett even more of a threat for gold in the event at the upcoming world championships. Click here for full event results. Meet recaps and results from other events can be found at Swimming Canada's website. Floswimming's full coverage of the meet, including interviews with champions, is available here.

At the TYR Meet of Champions in Mission Viejo tonight, 100 Free World Short Course Champion Nathan Adrian outtouched former American record holder Jason Lezak for the title in the Men's 100 Free. Adrian swam an in-season best of 48.92, while Lezak came in at 49.07, off his season best 47.80 and his meet record of 48.75 from last year. Full results can be found here. To view Swimming World's coverage of the meet, click here.
Posted by David Rieder at 10:36 PM No comments:

The Women's 200 Back C-Final is currently in the water. Here are my last minute predictions for the Men's 100 Back.

Also watch Ben Hesen and David Russell in the A-Final, and note that Peter Marshall is in the B-Final.
Posted by David Rieder at 9:41 PM No comments:

During the final day of the Mare Nostrum series in Monaco, Germany's Paul Biedermann broke Dutchman Pieter van den Hoogenband's seven-year old European record in the 200 Free. His time of 1:44.88 is one one-hundreth of a second better than the mark posted by the Flying Dutchman on his way to the 2002 European title. Click here to read the original story (not that I've figured out what language it is!).

After Biedermann broke Thorpe's 200 Free short course World Record last year, it was obvious he had more in the tank from his 1:46-flat fifth place finish in Beijing. However, I don't think anyone expected a drop like that. His time places him fourth on the all-time list, behind Michael Phelps, Ian Thorpe, and Olympic Silver Medalist Park Tae Hwan. This swim automatically throws Biedermann into contention for a medal, possibly even gold at this summer's World Championships. If Phelps chooses not to contest the event, Biedermann could even be considered the title favorite.

The Monaco 50 knockout rounds, always exciting, featured a near-American record. After the first four rounds, only former American record holder and 2007 World Silver medalist Cullen Jones and Olympic Bronze medalist Alain Bernard remained. In the final, Jones obliterated Bernard, swimming a lifetime best 21.58, 0.01 under the time that was once the American record. His time was just 0.11 off Garrett Weber-Gale's American record, and it sets him up as the favorite to win the national title in three weeks.

The 42nd Swimnetwork.com Santa Clara International begins Thursday, and it features (at least*) TEN Olympic gold medalists. The highlight has to be Michael Phelps, who is tenatively scheduled to contest the 200 Fly, 400 Free, 100 Free, and 100 Back at the meet. While he is heavily favored (DUH!) in the 200 Fly, he will face tough competition in the other three events. Also, 3-time gold medalist Ryan Lochte will swim. He will contest the 100 Breast, 400 IM, 100 Fly, 200 Back, 50 Free, 100 Free, 200 IM, and 100 Back, though he may pull out of some of those. Those competing include:

More analysis as the meet gets closer.

Also, click here to see the order of events for Nationals (subject to change).

*Maybe more to be added later?
Posted by David Rieder at 9:10 PM No comments:

During the second day of swimming at the Mare Nostrum tour in Barcelona, Libby Trickett provided the fireworks with a World Record in the Women's 100 Free. Leading throughout, Trickett recorded a 25.50 split at the 50-meter turn, a tenth off World Record pace, but put in the afterburners and came home in 52.87 seconds, wiping one one-hundreth of a second off the mark she set in Sydney last year.

Will it happen? I think so. Trickett's 24.21 in the 50 is the second fastest time in the world this year, behind Marleen Veldhuis' 23.96 World Record. It is also faster than she swum at either Australian Trials or the Duel in the Pool, both meets where she swam under 53 in the 100. She has looked stellar so far this year (with the painful exception of her Trials 100 Fly), and this would be another step in the right direction towards the defense of her world title.
Posted by David Rieder at 5:30 PM No comments:

He will swim the 200 tomorrow and finish up with the 50 on Sunday.
Posted by David Rieder at 2:34 PM No comments:

This weekend, at two meets halfway accross the globe from one another, the stars of the swimming world, including two thirds of the Australian team, will race in preparation for this summer's World Championships. The Mare Nostrum series kicks off in Barcelona, while a group of stars convene in Tucson, Arizona, for Southwest Classic. Those competing include:

This will be Grevers' first Long Course meet since Beijing (he swam in Short Course Nationals and the Long Beach Grand Prix), where he won three medals. Look for him to post a 48 or 49 100 Free and 53 or 54 100 Back to enter the World rankings, likely somewhere near the top. One of the biggest match races of the meet will be between Grevers, Ashley Delaney, and possibly Hayden Stoeckel in the 100 Back.

With all the stars in the pool, fast swimming is inevitable. Don't be surprised if there are some DQ's with certain swimmers not accepting FINA's swimsuit regulations and wearing unapproved suits. Note that both USA Swimming and the Mare Nostrum tour have banned unapproved suits from all meets. (For example, Mr. Munoz and Mr. Bousquer, no Jaked.)
Posted by David Rieder at 12:15 PM No comments:

One of the all-time greats in American swimming turns 20 today. While she is having shiity days in Colorado, the rest of us in the swimming world want to wish Katie Hoff a happy birthday, and good luck!
Posted by David Rieder at 11:00 AM No comments:

Ryosuke Irie...can he do it without the suit?

Today in an article, Japan's Ryosuke Irie talked about his mission to break a World Record in an approved suit this weekend at the Japan Open. (It was at this meet last year, you might remember, that Kosuke Kitajima broke the 200 Breast World Record and Irie himself first went under the 1:55 barrier in the 200 Back.) The question: can he do it? And if so, the 200, the 100, or both? We shall soon find out.
Posted by David Rieder at 3:28 PM No comments:

Note: if you answer "other" for any poll, it will not count UNLESS YOU SPECIFY! Thank you!
Posted by David Rieder at 10:36 AM No comments: